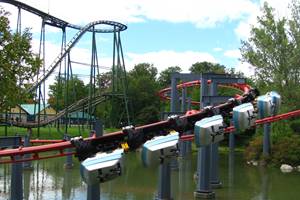 Canada's Wonderland is a 330-acre theme park located at 1 Canada’s Wonderland Drive, Maple, ON, L6A 1S6 in Vaughan, ON, Canada. It opened May 23, 1981. The current owner of the park is the Cedar Fair Entertainment Company. As of 2014, they ranked sixth of ten of the top ten theme park groups worldwide.

There are eight themed areas within the park. At the main entrance and exit, there is International Street(IS). This is the area where you can get ready for the day’s events. There are the information areas, ride assistance areas, shops and eateries as you enter the park. At the end of the street, stands Wonder Mountain. This is a ride that opened May 24, 2014, called Wonder Mountain’s Guardian. This rollercoaster ride combines 3D animation and interactive gaming, pitting riders against each other as they ride through the mountain to score a spot in the Wonder Mountain’s Guardian Hall of Fame. The Action Zone is to the left of IS and contains the rides Sledge Hammer, that gives you the feeling of a mini-drop tower feeling throughout the ride, and the BEHEMOTH, with its high drop and fast curves. As you walk north, you will enter Splash Works, where you will find the rides Riptide Racer and Blackhole. A family favorite is the White Water Canyon, which has an area all its own. Walking east you will come to Kidzville.  While there, you will find the junior roller coaster Silver Streak and Swingtime before entering Planet Snoopy. The fun continues for the kids, with more rides and activities at JOE COOL’S DODGEM SCHOOL and play a round of PEANUT PUTT-PUTT golf. As you head south, back towards Wonder Mountain you will be in the International Festival area where you will find the Shockwave and the Bat along with the Klockwerks. A small turn to your right will lead you to Medieval Faire, where you can find the Nightmare, Leviathan roller coaster, Spinovator, and Riptide.

Of course, this is just a few of the rides within Canada’s Wonderland areas. The Action Theatre, which features “Dinos 3D Movie” and is located between White Water Canyon and Kidzville; and Wonderland Theatre, in Medieval Faire, is featuring “Dimension”. Canada’s Wonderland also provides a safe place to lodge your pet while you spend time in the park to the right of the entrance. There are also arcades in the Action Zone and Medieval Faire areas for the gamers in the group. If you want to bring in a group or company picnic for the employees and their families, there is a Courtyard Group Catering Facility also off the Medieval Faire, where your group can meet and have a catered affair. Some have compared Canada’s Wonderland to Disneyland. I prefer to let Canada’s Wonderland stand-alone. Are they similar? Yes. To compare the two does a disservice to both of them. All amusement parks will be similar in some way. It is not about how similar one place is to another; it is about the fun you have while you are there. Canada’s Wonderland is one of those places! 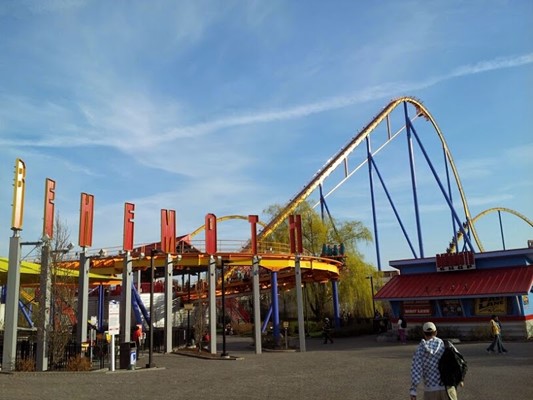